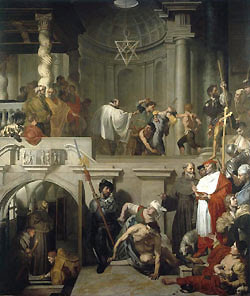 I came across this painting while on holiday in Germany. Titled Pope Nicholas V Visits the Burial Place of St Francis of Assisi, it was painted by the French-Flemish artist Gerard Douffet in 1627 and depicts (I learned later) a popular legend of the time, which states that when the Pope visited the saint's last resting place in 1449 he saw the form of St Francis floating above his tomb. What fascinates me about the painting, though, is not the apparition of the holy man or the Pope's serene expression, but the fact all around them scenes of unbridled chaos are erupting. A riot is breaking out in church, and the appointed leader of Catholicism seems either oblivious or powerless. (It's worth noting that this painting was created just as the Thirty Years' War was getting going, a savage sectarian conflict that left seven million people dead and large areas of Germany depopulated.)
What has this painting to do with autism? Nothing much, except that at the time I viewed it Euan was creating a chaotic scene of his own. The painting is at the far end of the gallery in the castle of Neuburg an der Donau, a huge hall where Euan delighted in the wide open space. As he ran around, shrieking at high pitch and revelling in the acoustics, the battle to contain him began to look desperate. Then we realised that the gallery attendants were shadowing us in pairs. One of them confronted Magteld as she grappled with Euan and ordered her to silence him. Shortly afterwards they started pointing out the exits, even though we hadn't asked to be shown them. No other visitor, to my knowledge, had complained about him. What a pity that such great art should be in the custody of such small minds.
Being on holiday with Euan was a constant reminder of how he struggles to make sense of the world around him. We did some preparation work, putting together a picture book of what he could expect to see on holiday. That helped us get through the airport: he had no trouble accepting things he'd seen in pictures, such as the hire car (renamed the "special holiday car" in the book), or the holiday home. But episodes such as the one above showed how hard he finds it to be in a strange place. It was particularly noticeable on the day we went to Legoland. Euan had been primed for the trip and loved going on the Lego trains and boats. But after a few hours he looked exhausted, confused and angry. It was as if his brain had used up its capacity to take in new experiences. His eyes looked sluggish and vacant, almost as if he was sedated. He lashed out at the slightest provocation. We left there and then, before the memory was too badly stained.
Euan often acts as if his mind runs on tramlines: if we deviate from a preset route, or go off in an unknown direction, he rapidly becomes anxious. For instance, we drove 100 miles to Nuremberg, then walked 200 yards and sat down at a cafe for coffee and juice. Immediately after that Euan wanted to go home, and protested loudly and repeatedly as we trudged round the city. He thought the sole purpose of the journey was to go to the cafe, and couldn't comprehend why we weren't going straight back home once we'd finished.
For all that, I have fond memories of our holiday. We visited Munich twice, went to Augsburg zoo and Legoland, swam in the local outdoor pool and went walking in the Urdonautal. For Euan the highlights were watching the Simpsons on television (he couldn't care less that it was in German) , going to the local adventure playground and, of course, Legoland. Once we'd been there he wasn't interested in much else and he spent the last four days impatient to go back home on the plane. I could easily complain about his inability to adjust, but when I think of how hard he tried to make sense of the blitzkrieg of new experiences, I can only admire him. Where we soak up the novelty and excitement of the bustle of a strange place, to him it must seem as chaotic and disturbing as the scene in Douffet's painting.
Posted by Autistic Dad at 14:54 No comments: